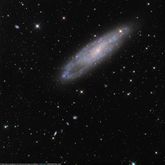 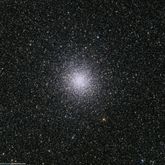 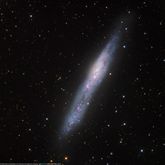 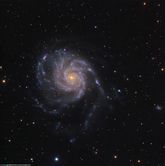 Seeing conditions during HA-data acquisition below average, transparency very good. Seeing conditions for R, G average. Seeing conditions for B and L fine. Transparency in RGB very good. Moon present while imaging L and B. The Crescent Nebula, aka NGC 6888, is a very well renown and most intriguing object located in the constellation “swan” in the northern hemisphere. At an apparent size of about 18 by 13 arc-minutes it is a very pale nebula. Even in a moderate amateur telescope you cannot see this nebula. One would need absolute dark skies (or narrow band filters) and a decent “light buckett” to glimpse the nebula visually. It’s absolute diameter is some 25 by 18 light years. Gazing at NGC 6888 means we are looking 4700 years into the past. NGC 6888 renders a nebula coming from the blueish star at the center. And this is known to once have been a super-giant star. That means the star has had a giant mass! Small stars like our sun dwell some Billions of years with their fule. Super Giant stars are kind of play-boys, as they deplete their fule at “full speed”. And in this particular case the central star qualifies for being summed upon the socalled “Wolf Rayet” stars. After only a coule of Million years the fule is almost used up and the star is standing right before a significant change: it is gonna go supernova quite soon, spoken in cosmological terms, though. So, at present we are looking at a star that vents its outer layers into space at terrific speed and therefor the star sustains severe loss of mass. The gas is holding lots of oxygen and hydrogen, just before the individual big “bang” of the WR-star. Read an intruiging story about the Crescent-nebula written by Tammy Plottner from UT. 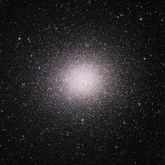 Messier 82 is one of my favourite galaxies because it is such a beautiful target for visual observation! The galaxy is located in the constellation of “Big Bear” aka as “big dipper”. You can spot the spectacular galaxy in a strong bino already. But when you observe M82 in a decent telescope of powerful light-collection capacity, it revelas a lot of the dust-lanes!

M82 is a so-called star-burst galaxy. This means, that stars form at a significant higher and more intense rate than in galaxies of comparable mass. One tends to believe this is linked to a dramatic gravitational effect, caused by the interaction with “near-by” M81. However, neary-by means 12 Mio light years. M82 is one of the best investigated “star-burst-galaxies”.

The redish areas in the image represent Hydrogen that emits strongly in infrared and radiowaves. Thie close encounter of the two neighbourghing galaxies is fabled to have taken place some 400 Mio years ago. Based upon observations in near infrared-, infrared- and radiospace telescopes as well as X-ray examinations the core of the galaxy might hold more than only one supermassive black hole.

Far to the right in the image you can identify a bit of a lighter area in space. This is not an artefact but a result of the tidal-effects based upon the gravitational interaction of the two galaxies M82 and M81.

M81 is probably one of the most popular galaxies among the celestial objects of the Northern Hemisphere. Discovered by Johann E. Bode in 1774, M81 is located in the constellation “Big dipper”. Shining at 7m0 visually she makes a wonderful target for a bino-viewer, as this sprial-galaxy is considerably large, measuring ~ 27×14 arc minutes (compare the full moon appears at 31 arc minutes). In a distance of about 12 Mio light years, this galaxy is a bout 4 times more distant than the famous Andromeda galaxy, the largest galaxy visible from the Northern Hemisphere. M81 is only the most prominent “star” of a bunch of galaxies, called the M81-group: M82, NGC 2403, NGC 2976, Holmerbg IX, NGC 3077 and others render further members of this group. In a decent amateur telescope (above 16″ aperture), however, M81 reveals her entire beauty, as you can then gaze into the spiral arms and see the very bright core, that, by the way, houses a super massive black hole, which comprises perhaps 100 Mio solar masses.

In regards to gravity, M81 is engaged to M82, respectfully. Actually these two are bound together by gravity and therefor rotate around a common center of gravity, bringing them quite close to each other. At present (presence would be what we humans of the 21st century can gather now) our own galaxy, the Milky Way would merely fit inbetween M81-82; expressed in numbers we are looking at 120.000 light years distance between the two. M81-82 is fabeld to have gone through a severe interactive gravitational encounter some hundreds of million years ago. As a result, huge masses of gas, dust and also stars are strewn inbetween the two galaxies. Whenever galaxies collide or at least come close to eachother, serious changes take place, metamorphing the original phenotypical appearance of both galaxies. Consequently, M82 has turned into a so called “star-burst” galaxy, nursing now millions of new stars, which could be addressed as “off-spring” of such a galactic interaction.

In the image you might notice a small little irrgular looking structure a little above the galaxy and a little to the left. This object is a small satellite-galaxy of M81, called Holmberg IX, named after its discoverer Erik B. Holmberg, a Swedish astronomer of the last century. Near the bottom and a little to the left is one of a typical background galaxies, named PGC 29505, shining at about 17m0.

When the famous Austrian mountaineer Gerlinde Kaltenbrunner hovers in the highest mountains of the world, she might be able to spot this galaxy with bare eyes!

Discovered 1784 by William Herschel, this spectacular galaxy is located in the constellation “pisces”. Holding 7.6 arc minutes by 2.8 arc minutes she is not exactly large, but rather bright as its apparent magnitude measures some 10m7, being about 24 Mio light years away from Earth. As a result of these numbers we find NGC 660 to hold about 36.000 light years in diameter.

NGC 600 is counted among the so called “polar-ring-galaxies”, which is something peculiar among all galaxies known at present: Basically two galaxies were about to merge entirely, but by gravitational means of “dark matter” they have gotten “arrested” while undergoing the process of melting together. In an advanced stadium of such unification both galaxies are believed to no longer proceed further more into eachother. NGC 660 is also a strong candidate for a search for compact radio sources.

Discovered by William Herschel in 1787 the distinctive shape of the nebula donates the name, reminding the observer of an embryo. The dark hole which can be seen very well in the image near the center, origins back a long time ago, when a seperate nova blew this part of the nebula up. 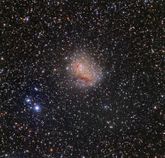 IC 10 is a so called “dwarf-galaxy”, located in the constellation “Cassiopeia” in the Northern Hemisphere. Discovered in 1887 by Nicholas Mayall it also represents an irregular shaped galaxy. It took the astronomers of those days quite a while to identify the object to be an extragalactic one! This was achieved in 1935. Nowadays we know IC 10 to be some 2.5 Mio light years away from our solar system.

Visual magnitude of this tiny galaxy, that appears to be some 7 by 6 arc minutes of size, is 10m4 which sounds brighter than it really is. One needs quite a serious telescope to spot this galaxy, as the surface-brigthness of the galaxy is rather faint.

Scientific investigations of recent times revelaed this galaxy to be a so called “star-burst” galaxy. That means it produces lots of new hot star-clusters. Hydrogen supplies of IC 10 is huge! It forms a sort of envelope around the galaxy body that measures about 1 arc minute. In this image above one can spot this H2-envelope pretty well, that, surprisingly enough seems to rotate in the opposite direction, than the galaxy body does. Also, when you open the “full-size” subpage or the “enlarged-cop” version, you will perhaps see lots of those small star-clusters within the galactic body.

To the lower right you might notice some “luminousity” in space. That seems to be intergalactic Hydrogen; the matter of which all is made of in the universe in the first place.

This fantastic galaxy can be spotted in the constellation “Lynx” in the Northern Hemisphere. To perceive the light visually you would however need a telescope, as the brightness is limited by 9m7. In a distance to Earth of about 27 Mio light years the appearent size of this galaxy measures 9.3 arc minutes by 2.2 arc minutes. That of course means we are looking at the galaxy almost from the edge. Like in so many cases of first human ever to lay eyes on this object was Wilhelm Herschel on 5th of February 1788. Those days back the galaxy was considerably closer to earthbound observers, as NGC 2683 recedes at the tremendous speed of about 400 kilometers per second. For earthlings 3 Billion kilometers sounds a lot, but considering the huge distance of millions of light years, this is practically insignificant.

Have you noticed the background galaxy group to the left? There is a region of very small reddish objects in the upper left quadrant of the field. These galaxies have been measured to some 4.3 Bio licht years away from Earth. That means, the light that reaches us nowadays comes from a time, when Mother Earth was about to be formed (thanks Mischa Schirmer for looking up the data).

This majestic spiral galaxy, which we view exactly from the edge, is staged in an adequate constellation (Lion), suiting the huge size of NGC 3628. The longitudinal diamter is barely about 1/4 of the apparent size of the moon. That makes her pretty large! This said, and knowing that NGC 3628 shines at 9m5 visually, which is pretty bright for a galaxy that is roughly 35 Mio ligh years away from our place, one still cannot understand, why Mr. Messier did not mention the galaxy in his famous catalogue, though he did so with the neighbouring very famous ones (M65,66), only half a moon away from the location.

BTW: These three are supposed to interact by gravitational means. There is evidence for such interaction, as you can find a faint so called “tidal trail” of stars to the left. These represent stars, that have been distracted by gravitational force of M65, 66. Like in so many cases, it was Wilhelm Herschel who discovered NGC3628 in 1784.

Should you be interested in a comparison with an older image taken with a one shot color CCD from Starlight Xpress SXVF M25C then please click the line “One shot color Image SXVF M25C (2007)” above.